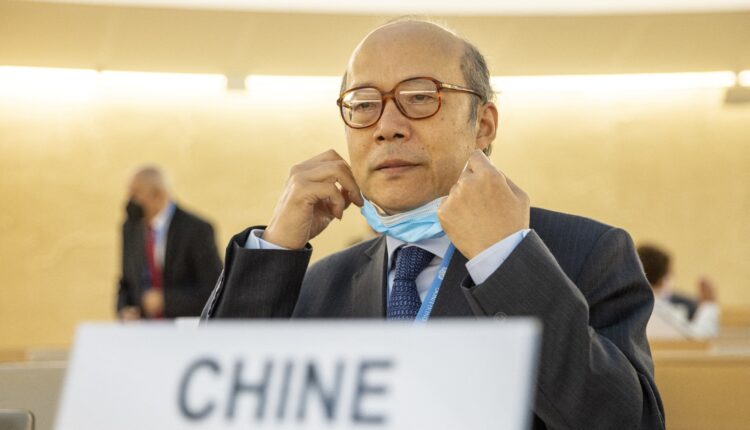 “We are disappointed that, by a narrow margin, the Council was unable to agree to hold a discussion about serious human rights concerns raised in the recent independent assessment by the Office of the UN High Commissioner for Human Rights that is part of a growing body of expressed concerns by credible sources,” Ambassador Michele Taylor, U.S. permanent representative to the UNHRC and co-sponsor on the motion, wrote in a statement following the vote.

“No country should be immune from a discussion at the Council,” she continued. “We will continue to work closely with our partners to seek justice and accountability for victims of human rights abuses and violations, including the Uyghurs in Xinjiang.”

Richard Goldberg, former National Security Council official and director of the international organizations program at the Foundation for Defense of Democracies, urged Congress to take action that will keep the U.S. from involving itself with organizations that “legitimizes human rights abusers.”

“The Biden administration reversed U.S. policy and rejoined the U.N. Human Rights Council, arguing it could reform the council from within,” Goldberg told Fox News Digital. “Instead, we now see the folly of that decision — failing to even win a vote to debate a genocide in Xinjiang while the council’s open-ended antisemitic commission of inquiry into Israel proceeds apace.”

“It’s time for Congress to consider legislation prohibiting U.S. membership in a council that legitimizes human rights abusers and fuels antisemitism,” he added.

The UNHRC released a report at the end of August in which it detailed concerns regarding China’s detention of the Uyghur population, recommending that the government “take prompt steps to release all individuals arbitrarily deprived of their liberty in the Xinjiang Uyghur Autonomous Region (XUAR)” and “clarifies the whereabouts of individuals whose families have been seeking information about their loved ones,” among other measures.

But the 48-member council ended up rejecting a motion tabled by the U.S. and Norway, and backed by the United Kingdom and Canada, with 19 against, 17 for and 11 abstentions. The most notable rejections include Venezuela, Cuba and Indonesia, while Brazil, India, Mexico and Ukraine were notable abstentions.

UNHRC spokesperson Rolando Gomez told Fox News Digital that no other motion can be considered in the current session, which concludes tomorrow, as the deadline for submission of draft resolutions passed. He stressed that the vote does not change the ability for other bodies and states to continue addressing the issue in Xinjiang.

CHINA STILL BENEFITS FROM RUSSIA RELATIONSHIP, EVEN WITH INTERNATIONAL REPUTATION AT RISK: EXPERTS

Amnesty International lambasted the HRC, saying it “failed the test to uphold its core mission” to “protect the victims of human rights violations everywhere.”

“Today’s vote protects the perpetrators of human rights violations rather than the victims — a dismaying result that puts the UN’s main human rights body in the farcical position of ignoring the findings of the UN’s own human rights office,” the organization said in a press release.

Overview of the Human Rights Council special session on the human rights situation in Ukraine at the United Nations in Geneva, Switzerland, May 12, 2022.
(Reuters/Denis Balibouse)

“For Council member states to vote against even discussing a situation where the U.N. itself says crimes against humanity may have occurred makes a mockery of everything the Human Rights Council is supposed to stand for,” the statement continued. “Member states’ silence — or worse, blocking of debate — in the face of the atrocities committed by the Chinese government further sullies the reputation of the Human Rights Council.”

“Political and economic interests should not trump serious human rights concerns, and no state should be shielded from scrutiny at the Human Right Council.”

Amnesty International vowed to continue pushing for accountability and “justice and truth” for the victims and their families, saying the UNHRC must revisit the vote “at the earliest.”

Children of China’s Uyghur Muslim ethnic group take part in a Feb. 4, 2022, rally in Istanbul, Turkey, against the Beijing Winter Olympic Games over China’s treatment of the minority.
(Reuters/Murad Sezer)

Former President Donald Trump withdrew from the council in 2018, with then-United Nations Ambassador Nikki Haley criticizing the council as “a protector of human rights abusers and a cesspool of political bias.”

The Biden administration rejoined the much-maligned U.N. Human Rights Council and ran for election last year. Having successfully won a seat, it formally rejoined the council at the beginning of this year.

Reuters contributed to this report.

Peter Aitken is a Fox News Digital reporter with a focus on national and global news.

Nov 21, 2022
Prev Next
Find more, like the above, right here on Cryptopolytech.com by following our extensive quiclick links appearing on images or within categories [NEWSer CHEWSer].
View ALL Headlines & Breaking News here.
We compile ‘news of the day’ content in an unbiased manner and contextually classify it to promote the growth of knowledge by sharing it just like UN body rejects discussion on China human rights abuses: ‘Failed the test to uphold its core mission’